The eyes of the world were set firmly on Anfield; riveted and astonished by the events that were to take place.

The unfathomable, spectacular and, frankly ridiculous performance of Liverpool’s young team of heroes culminated in the latest Remontada etched into the colossal, almost deity-like history of FC Barcelona.

We could spend hours writing, and days reading, the superlative words produced by Sports Writers in the attempt to describe the indescribable; but we won’t. Instead, over the next few days, we will focus on the four goals.

Four single momentary events that enabled the sensational, seemingly insurmountable 3-0 to become a breath-taking and indelible 4-3, and for Liverpool FC to reach their ninth European Cup final.

We begin at a place where so many of this Liverpool team’s penetrative attacking moves do – with their goalkeeper Alisson Becker.

The Brazilian plays a simple short pass to Milner, followed by another short pass to Shaqiri – the Swiss winger was set to play as a right forward in place of the absent Mohamed Salah, yet finds himself in a very deep position to receive the ball – one more short pass finds Joël Matip free of the 4 pressing Barcelona attackers.

Note here the position of Alba as he begins to make his way back into his defensive half to provide wide cover for the Barcelona defence: 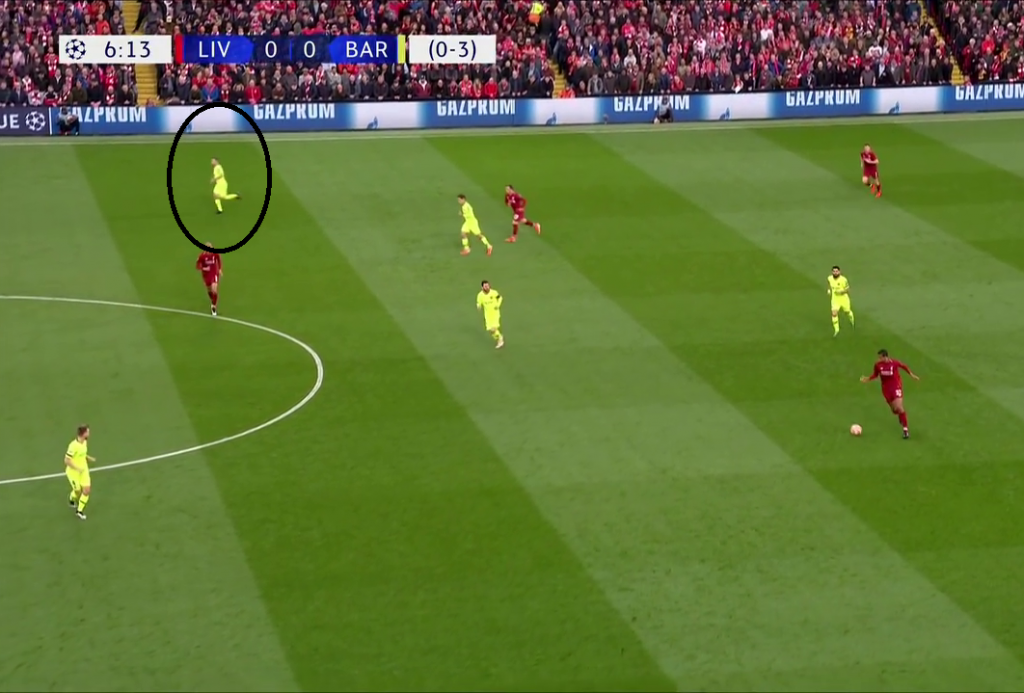 Lionel Messi and Luis Suárez are the remaining offensive players within closing distance of the Cameroonian central defender, but neither make any concerted efforts to close the space or apply pressure. Perhaps they were unaware of the competent long passing ability possessed by Matip, or perhaps they were riskily – though in the end correctly – anticipating that the pass would not reach its intended target.

He has good vision, Matip, and his intentions were also good. Sadio Mané found himself unmarked and in space within a zone left unoccupied by Barcelona’s offensively talented, yet sometimes defensively lax, wing-back.

We saw that Jordi Alba was part of the attacking quartet tasked with, rather feebly, pressing Liverpool in their first phase, and we saw how at the moment Shaqiri released the ball, Alba was moving back towards his vacant defensive area.

Note Alba’s body position, he’s very straight and very set on simply putting himself back into a position where he might be able to mark or at least effectively hinder Mané. There are two very quick glances over his shoulder to see where the forward is currently positioned.

It isn’t until Alba realises that the long pass is wayward and he can make the interception does he begin to run with any real urgency. The wing-back is fast over short distances, and makes up the ground with ease to win a routine, unchallenged header.

Focus on Sadio Mané here, this time look at his body position. One vital aspect of pressing, and one that is drilled into counter-pressing forwards, is the ability to anticipate. The Liverpool forward begins his run into the space where he believes the ball will be after Alba heads it, before the ball has even reached the Barcelona player. 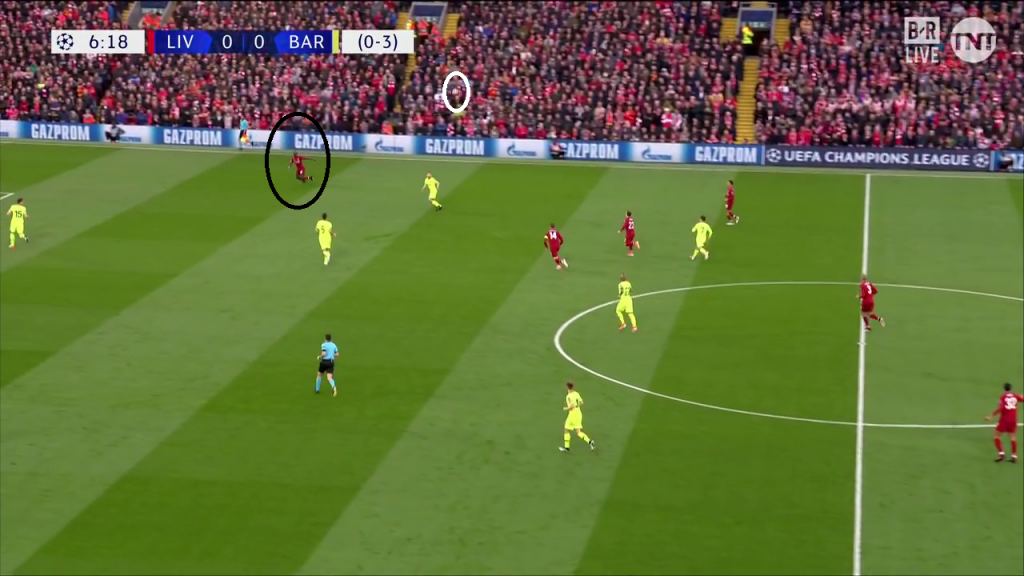 Like a seasoned card-counter playing the probability, Mané’s educated guess is absolutely correct.

It is a poor piece of defensive work by Alba, and the first of many on the night for the Spanish player, but without Mané’s intelligent running and opportunism, the ball finds its way to Clément Lenglet without any real danger.

Sadio Mané’s control is perfect, his pass to Henderson is deft. The Liverpool captain, himself following the play and making a text-book number 8’s run, is ready to take the ball in his stride and with an adept first touch beat Lenglet and penetrate the Barcelona 18 yard box.

Henderson’s second touch is arguably as good as his first.

With a drop of the shoulder and a fluid sweep of the boot, he takes Piqué out of the equation and takes a firm, controlled shot with his left foot. It’s too close to ter Stegan and the German makes a good stop with strong contact. The contact is too good.

Another aspect of the Liverpool counter-press is the willingness to hunt in packs.

Henderson was a willing receiver in support of the ball-winner Mané, and most advanced of them all was Divock Origi.

The Belgian seemed to skip with enthusiasm as his captain so gracefully broke the Barcelona rearguard. A striker with an instinct for goals is in a constant battle in trying to maintain the balance between staying onside and occupying a dangerous area. This was no different for the Liverpool striker. 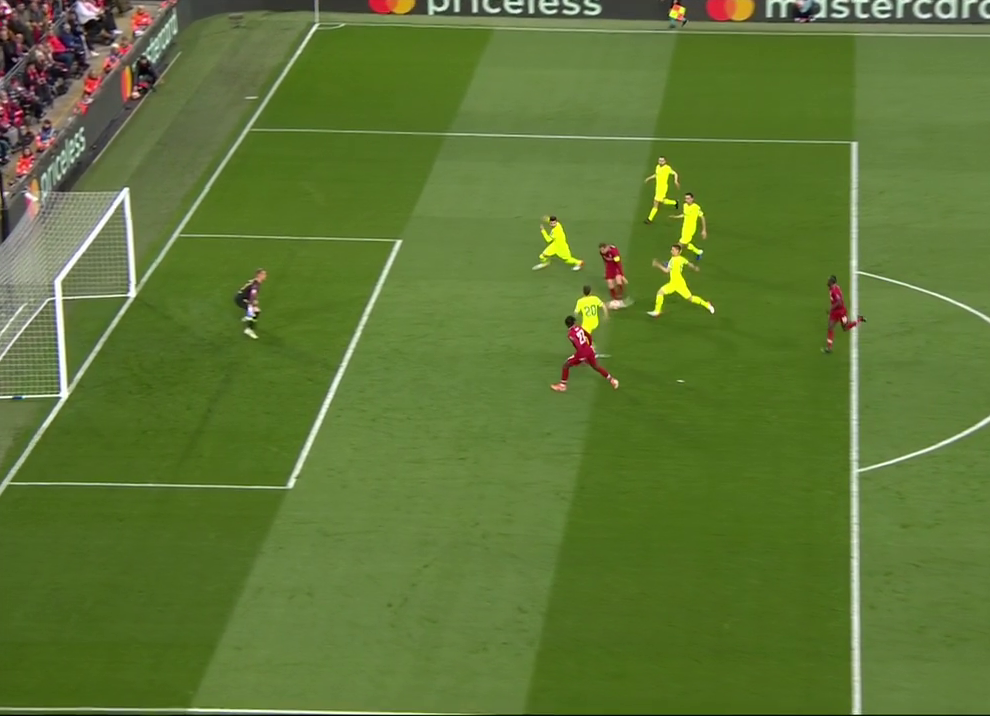 He was onside. Quite easily so in the end.

Barcelona’s goalkeeper, Marc-André ter Stegen, is among the best in the world; his reflexes, his command, his nerve and most of all his shot-stopping are difficult to rival. The save he makes from Jordan Henderson’s firm, and by all means good attempt was solid. It was too solid. The contact is made with the palm rather than fingers or finger-tips. Rather than the ball being pushed wide or rebounded behind him, the ‘keeper makes more of a block. The energy from the shot is absorbed by the save and the ball bounces kindly to the eager and willing Liverpool striker.

Origi makes no mistake from the advantageous, and again opportunistic position he worked himself into and scores Liverpool’s vital early goal.

Check back here at The Tactical Times very soon to find the analysis for Liverpool’s second goal.