After joining Liverpool, Thiago Alcantara navigated a fragmented, difficult, but ultimately still impressive first season in the Premier League. At his best, this player is one of the best.

Thiago can find, create and manipulate space in a packed midfield, he uses the ball as well as any player, he constantly makes the right calls and constantly plays on his own wavelength, inviting others to join him and elevate their own games. He is a brilliant midfielder.

All of this was conveniently concentrated into his debut for Liverpool – a pre-injury-ravaged Liverpool, with close to a full first team, before they fell victim to the terrible fortune that nearly ruined their season – when he was introduced as a substitute for the second half against Chelsea in a Premier League game at Stamford Bridge.

Thiago replaced an injured Jordan Henderson at halftime and went on to utterly dominate, dictate and decidedly deconstruct a helpless Chelsea side that would go on to become European Champions nine months later.

Coming into the centre of the midfield three, Thiago occupied Henderson’s 6 position, deputising for Fabinho who filled in at centre back for the game – an early taste of a bitter theme Liverpool fans would become all too familiar with throughout the season.

When Chelsea’s Andreas Christensen was shown a red card at the end of the first half, head coach Frank Lampard replaced centre forward Kai Havertz with centre back Fikayo Tomori to fill the gap. Reverting to a 4-3-1-1 with the numerical disadvantage, you might still expect a middle three of Kovacic, Kante, Jorginho to hold their own, even with the attacking outlet missing.

Thiago took no time at all in making the entire midfield his own. 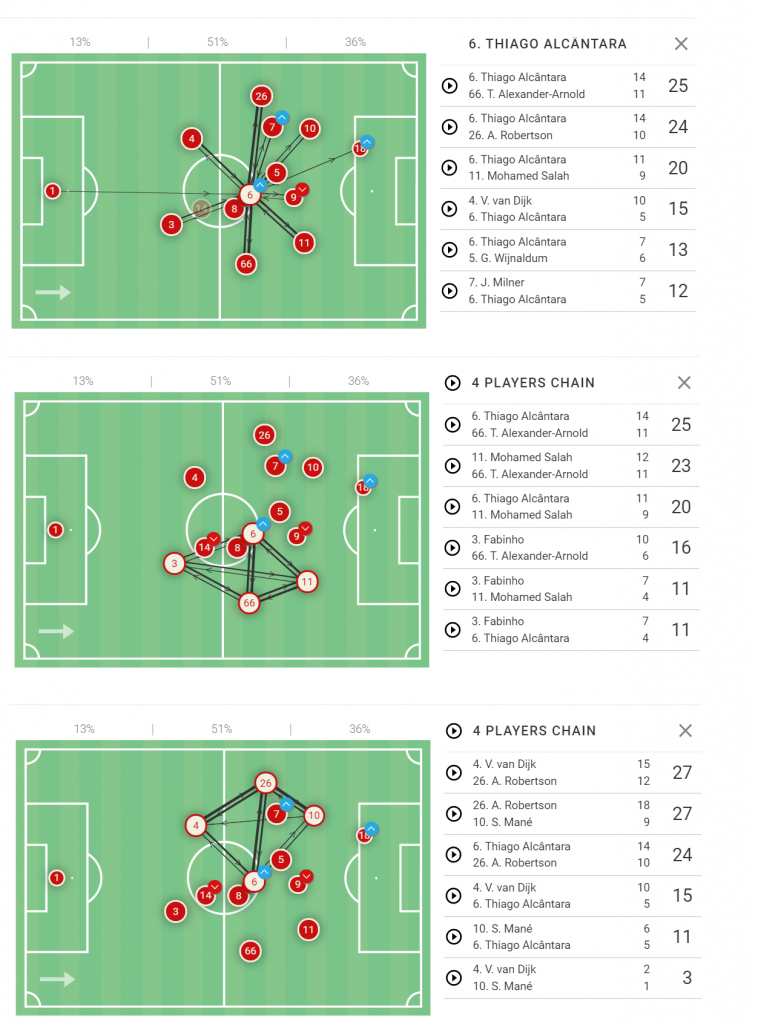 Constructing himself a Forward Operating Base in enemy territory, Thiago provided a fulcrum and anchor for the easy recycling of possession – by providing a constant and open passing option between his defensive and midfield lines;  he established ready, reliable, high-quality supply lines on both right and left flanks; through the use of long-range ballistic passing, Thiago stretched and opened up the enemy front line with laser-guided precision.

Thiago was able to put himself at the heart of his team’s middle third, always showing for the ball, providing an open lane without fail.

Upon receiving the ball he controls it with the next move in mind, he moves it on quickly and without hesitation. The plan is already decided before he gets it; the next move – and possibly the next and the next – has already been made. For the opposition there is no time to react, they can only anticipate and guess and hope for the best.

Thiago was moving with the ball as sleekly and as smoothly as he was when moving it on to another player. Like silk passed through the chrome tube of a rifle’s barrel, Thiago glided in possession. Each touch was sure and true, each pass a clean connection.

When he wasn’t directly involved, Thiago was on the periphery. Like a tireless conductor directing in the shadows while his orchestra soak up and bask in the limelight during their encore, Thiago was involved directly or indirectly in practically all of his team’s positive work.

Thiago’s passing covered every effective inch of the offensive end of the middle third of the pitch. 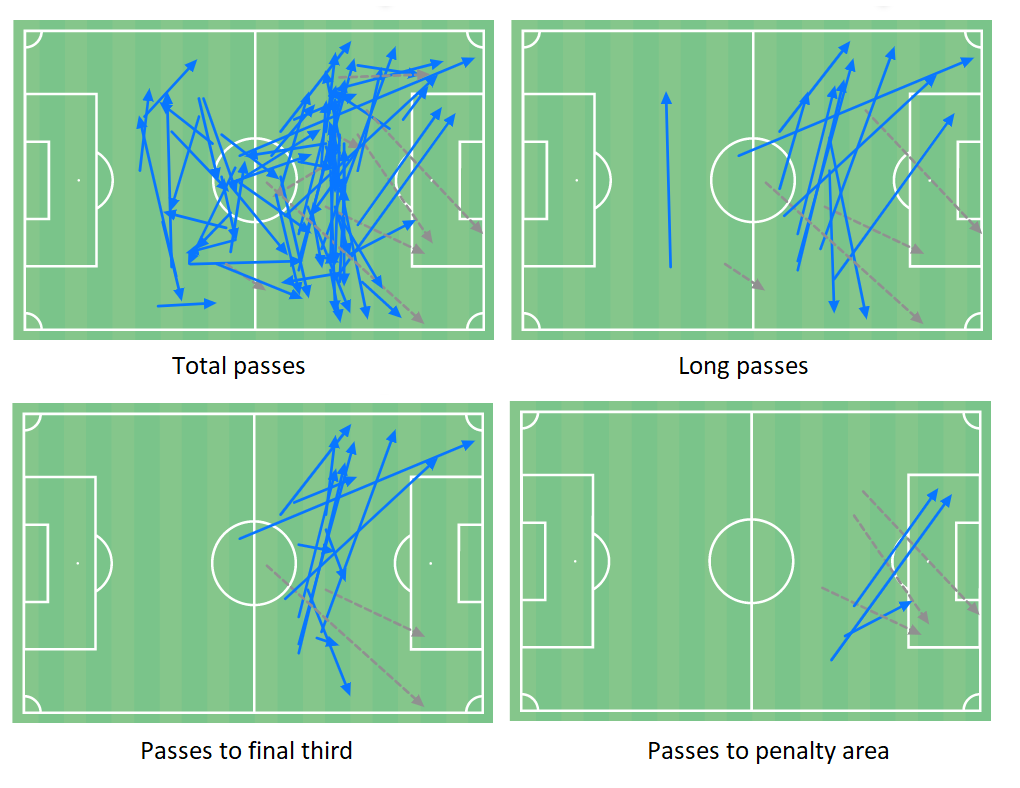 And through his control of the opposition, Thiago’s passing range controlled the game.

After playing a deep cross, Thiago reports back to his command post to receive the ball and reset the barrage.

Thiago plays the long pass left and the compact Chelsea block move with it. He follows his pass and takes up a position of aggressive engagement in the hole. He receives the ball again, the Chelsea block move right with the ball. Before the Blue shirts have registered reality, the pass is reversed back into the left channel where Andrew Robertson has been gifted by Saint Thiago that rare treat of space in an offensive area within a defensive low block.

Thiago is able to herd his opponents into an area of weakness and there is nothing they can do to fight it. They are presented with the choice of chasing the ball or chasing the irresistible shadow of a 5’7″ Italian born Spanish illusionist.

Again, the ball is moved far left, the defenders follow it. Thiago occupies an empty centre space and moves the entire skeletal structure of that play forward 20 yards and into the heart of the opposition half.

When he gratefully receives the ball again from a teammate grateful to continually have such a superb option, deep in enemy territory Thiago somehow finds himself with a world of choice ahead of him.

Thiago opts for the one option that I, and I’m sure many others, failed to spot. The high risk, high reward option. The option that even attracts a ringing endorsement from the Chelsea TV employee tasked with commentating on the fixture with no obligation of or interest in impartiality.  “A beautifully disguised pass” is one way of describing it.

And, just for good measure, when, with great difficulty, the ball is cleared by the Chelsea backline, Thiago even challenges for and wins the aerial duel, forcing the turnover which leads to Thiago recovering the ball again for the whole torturous tirade to begin again.

The level of control that Thiago imparted onto the game – onto the Chelsea midfield really – verged on abusive. These weren’t kids, this was a world class midfield. The team was missing a player but that only led to a more compact defensive third. Chelsea had no interest in playing through Liverpool, they removed a forward and reinforced their defensive lines; Thiago took a world class midfield trio out of the game and neutralised that plan.

Being able to witness this kind of ability and control – both positional and technical – condensed and concentrated into such a short period of time against such top-class opposition isn’t a common occurrence.

Thiago showcased an exhibition of midfield magic on one of the world’s biggest stages. When you hear a player “ran the game”, “controlled the park”, “dictated the tempo” or that “no one got near him”, this performance was the highest standard of that actually happening. Without hyperbole or exaggeration, this performance was that.

Unless otherwise credited, The videos used in this analysis belong to the Premier League, Chelsea TV and other relevant license holders. the tactical times do not claim to own any of the visual or audio media presented here. This analysis was created under Fair Use (17 U.S.C. § 107) and may not be copied, redistributed, edited or altered without the express permission of the copyright holder.