What is the ‘Power Ranking’?

It’s a numerical representation of the strength of each team in a league based on a number of particular statistics and metrics, and could potentially be used to predict the outcome in a game between two teams.

In this model I used the following stats: Goals, xG, Shots/90 minutes, xG/Shot, PPDA – both for and against.

Goals and xG are pretty obvious choices, as are shots/90 minutes. I added the quality of shots, which was measured with the sum of xG divided by number of shots taken.

It’s not hard to notice, as we move up the table, that the ’value of a shot’ increases. An average shot attempted by Liverpool or Man City is ‘worth’ 0.14 xG.

Last I looked at the PPDA/90 minutes (Passes Per Defensive Action) statistics. This is the number of passes that are completed by a team before a defensive action is performed.This is a useful metric for understanding how teams press, or how comfortable are they against pressure (PPDA Against). No surprise, Liverpool and City are leading the league by far.

From here, I adjusted the figures. That is an important step. You adjust stats by comparing them to the league average, so your system will reflect more accurately the real strength of each team, rather than raw, unadjusted statistics.

Here is how my table looked after the adjustments, and after bringing attacking and defensive statistics together as one number in each of the five aspects: 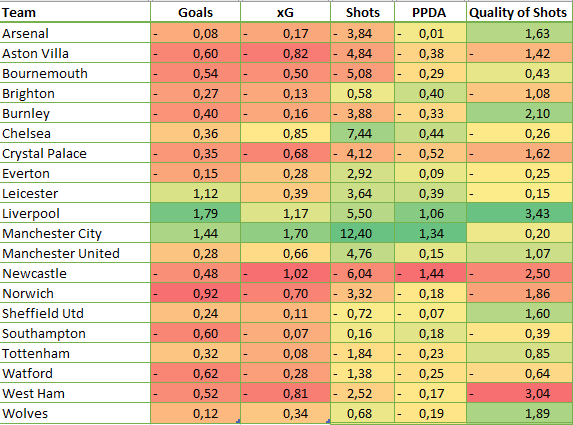 The league average is much higher when you have two high quality, attacking teams like Liverpool and Man City in the division.

From here, I simply took the average of these 5 numbers to get the final result: 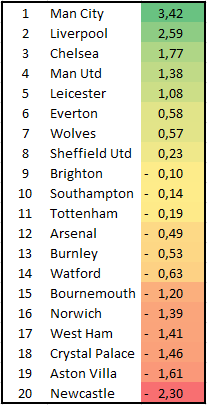 This was devised and written by Marton Balla. You can find Marton on TWITTER

If you enjoy our content please consider a one time donation via the site HERE, or become a site Patron on PATREON where you can access a number of different priority tiers to have a more involved role in our future.
[asp_product id=”549″]

By using Stripe Payment your credit or debit card details are not sent to The Tactical Times, your details are encrypted and this payment method is 100% secure.