Wolves’ forward Diogo Jota joined Liverpool for £45,000,000 in a whirlwind deal. This profile will look at what he does, and who the player is that convinced Liverpool to stretch the budget to accommodate him. 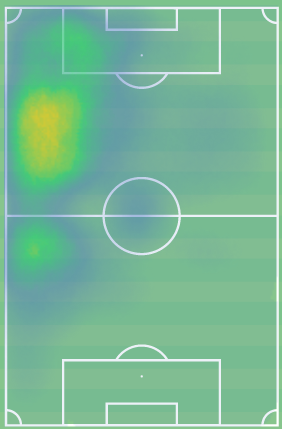 Diogo Jota is a forward in the mould of those already at Liverpool FC. He enjoys the wing, but he isn’t restricted to it. He is an instinctive, confident runner, he seeks space and moves into it. He isn’t always careful in possession, he is a risk-taker. A close control dribbler rather than an electric sprinter.

Jota loves a 1 v 1 take-on, and he is quite often successful in his attempts (completing 49% of 1135 attempted dribbles), he shows little concern for risk aversion when in possession. He usually looks to maximize attacking output, rather than hold onto possession in offensive areas.

He likes to take the most direct route to goal, usually through his defensive markers. Jota is capable of playing around and through a defensive block:

And Jota is capable of deft individual touches and skill to beat the block on his own:

Often the most advanced forward through counter-attacks, Jota can be found with an accurately placed, weighted, and well-timed long pass:

And shows a willingness to move with fluidity between wide areas, through half-spaces, and play through the central channel. He can link play between advanced forwards, using the direct running and ball progression to pull markers, open spaces, and enable opportunities in tight areas. He shows a fast turn of acceleration off the ball over short distances, vital in beating the last man.

Jota can follow the play and maximize position off the ball in order to utilize space as a third man, an extra runner, or a late arrival into the box. He has situational awareness and an instinct for timing.

He can delay runs and look for blind spots and gaps, before moving in as a centre forward, naturally comfortable playing in the opposition’s penalty area.

Jota can move inside to utilise his natural left foot, the short touches enabling fast changes of direction, pulling defenders with him to enable a runner:

And Jota can play vertically, moving towards the line, using those short touches to instead manipulate the half yard of space required to play a cross with his left foot (a very strong left foot):

He has the delicate touch to beat the last man when close to goal; he can keep a calm head in dangerous areas:

Diogo Jota joins Liverpool at their peak. A team with a front line arguably unequalled in world football. The assumption is that Jota will be the left-sided inside forward, deputy to Sadio Mané, and it is no exaggeration to say that I do see similarities in their style of play.

Both players are very focused on progression, both use a system of timing and short touches to beat their man; Mané has the raw pace, Jota the close control, but both have the explosive desire to enter dangerous areas without hesitation. Both like to cut inside to use their favoured right foot, but Jota is arguably just as comfortable on his left side, giving him an extra edge of unpredictability.

I don’t expect Jota to operate solely on the left side for Liverpool, I expect he will continue to show the fluidity in movement and positioning that he has done at Wolves. He is an instinctive forward. Sometimes central, sometimes wide, sometimes most advanced and lethal, sometimes deeper, patient and primed to strike. A difficult forward to track, mark and, usually, handle.

Jota will need to work hard to stake his claim at the club, he has some of the stiffest competition possible, but he is capable. The ceiling is very high for this player. He already shows intelligence in his movement, the football brain is there. He shows bravery and confidence in the way he attacks a situation. When the technique better follows, when he is more adept at the pure experience side of elite football – the real, actually elite, Champions League winning level of football – Diogo Jota can really flourish.

He is under the right manager for development, he is at the right club for explosive attacking, possession-based football. Diogo Jota has all the foundations for real success.

If you want to show your support and to help the Tactical Times, consider becoming a Patron for a few dollars. Patrons can access more comprehensive, detailed and in-depth analysis, as well have their name, social media links, websites or businesses listed on a dedicated Supporters page on our website.

You can find our Patreon HERE

Patrons can read this comprehensive video-assited analysis of one man who is sure to benefit from Diogo Jota, world class forward Mohamed Salah and his breathtaking display against Leeds United. His movement, his creative output, his ability to put the ball in the back of the net; what makes Mo Salah so special? Check it out HERE

Unless otherwise credited, The videos used in this analysis belong to BSkyB, the Premier League, BeIN Sport, ESPN and Sport TV. the tactical times do not claim to own any of the visual or audio media presented here. This analysis was created under Fair Use (17 U.S.C. § 107) and may not be copied, redistributed, edited or altered without the express permission of the copyright holder.